If you are  fortunate enough to visit Namibia you have to include a trip to
Etosha National Park. The word Etosha comes from the local Oshiwambo
language meaning “The Great White Place”. 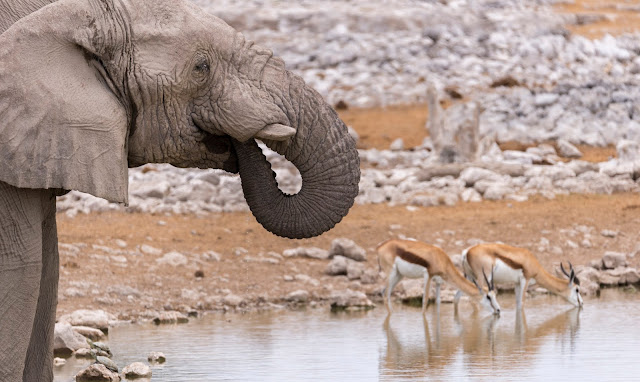 The Park is a 22 750km² wildlife sanctuary in Namibia – one of Africa’s most
stable and accessible.  Game viewing at the waterholes, especially during the
dry season (June to November) offers spectacular  photography opportunities
with an abundance of wildlife from a metres away. Etosha is home to
340 bird species,about a third of which are migratory.

The waterholes that surround the camps ensure that you are never left without
something to photograph. The landscapes and the vast Etosha pan are
always highlights for any photographer. 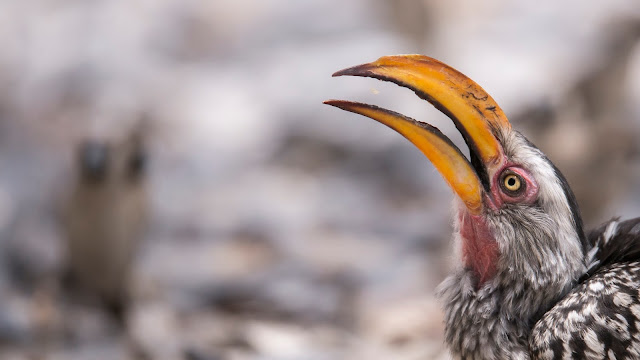 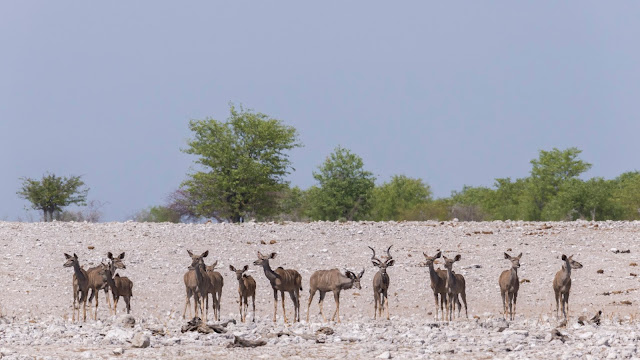 Herd of Kudus on their way to the Okaukuejo Waterhole

We stayed at Okaukuejo with a waterhole  right next to the rest camp.  It is floodlit
and draws black rhino almost every night as well as numerous elephants.
You are ore than likely to find the following: Early Monrning:  Lion/Hyena and Jackal;
Mid Afternoon: Game/ Giraffe/Elephant; After Dark:  Lion/Black Rhino/Elephants.

Animal activity at  waterholes can change on a daily and even hourly basis, and
that often it merely comes down to a combination of luck of the draw and
patience. Finding a good position, switching off the engine and waiting for
something to happen will often yield rewarding results  Guides should be
able to give you plenty more information on seasonal variations and on
where you might be able to see the broadest certain animals on a
particular day or at a particular time. 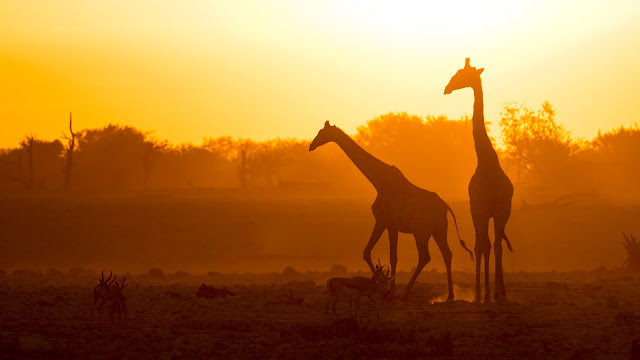 Day One:
We arrive at camp at 13:00. Temperature of 35 degrees celcius. We decided to
unpack and spend time at the Okaukuejo Waterhole just next to our room.
The Northern side to be the best for morning Photography and the Southern
side being the best for late afternoon photography. 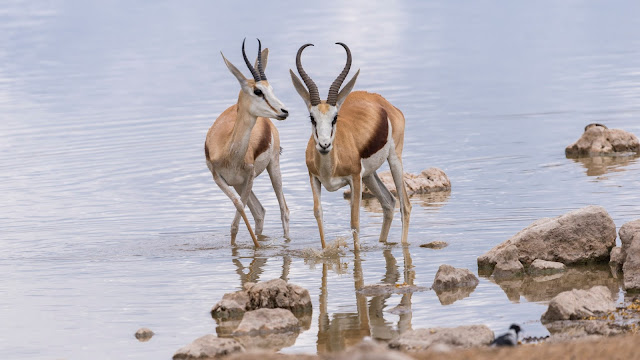 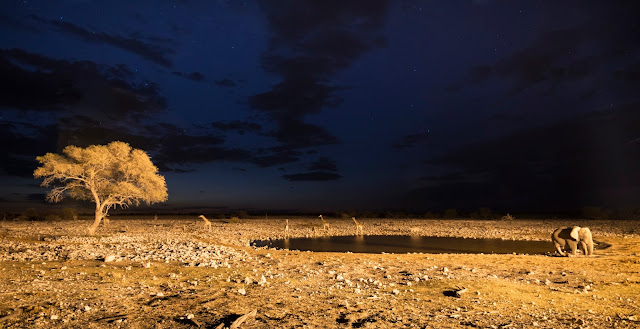 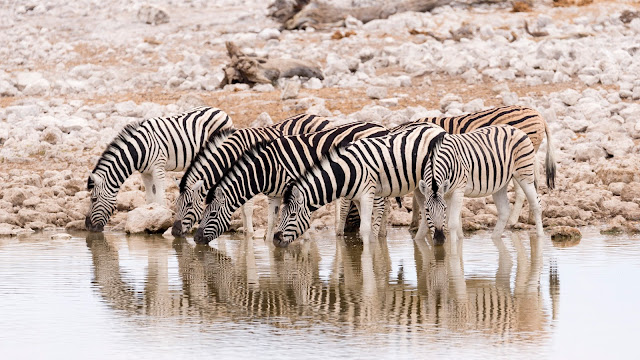 Day Two:
We had breakfast at 6:00 am every morning and left camp at 6:19  (when the gate opens).
Breakfast packs might be a good consideration since the staff are not a 100%
up and ready for the early birders at the dining area. We headed east to
Halali towards Newbrownii; Gemsbokvlakte and Olifantsbad. We headed
back to Okaukuejo  to check on activity at the waterhole. Except for
springbok, Zebra  and Gemsbok we had a journey of Giraffe coming down for
a drink with a beautiful sunset. 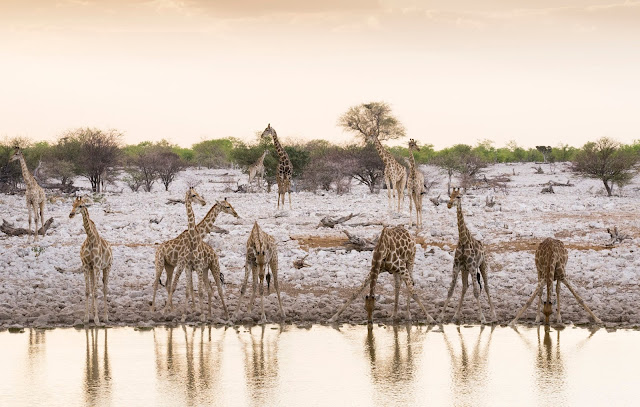 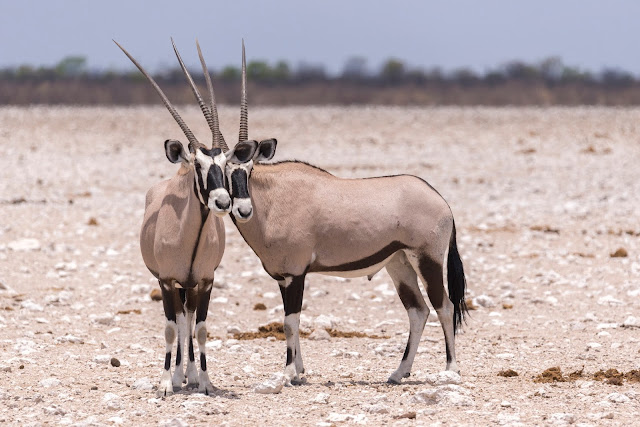 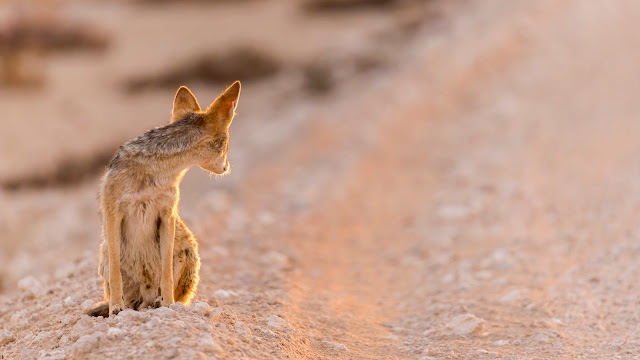 Blacked Backed Jackal on our way to Gemsboksvlakte

Day Three:
We made a quick turn at the same waterholes we visited the previous day.
We saw a beautiful maleLion Drinking water at Gemsbokvlake. After this we decided
to leave for the Salvadore area and visit Rietfontein for possible Elephant activity over
lunch time. The waterhole is known for big herds of Elephants coming to cool down
and drink water. We found a small herd of about 15 Elephants at the waterhole
as well as a big herd of Wildebeest and some Springbok. 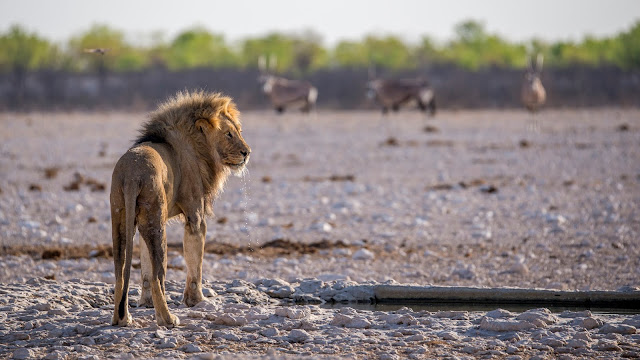 Lion having an early morning drink at Gemsboksvlakte 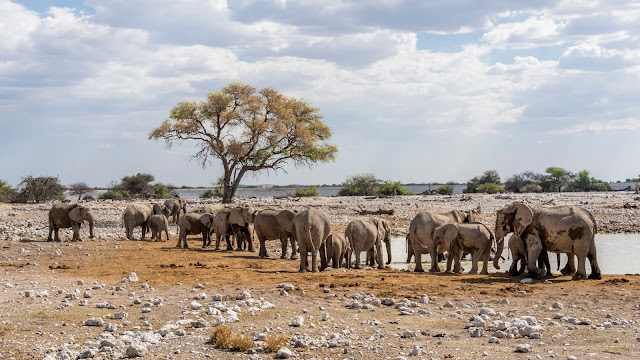 Herd of elephants at Okaukuejo

Day Four:
We decided to have a short visit to the Newbronii waterwhole for a hour or two
before we were heading back home to Walvis Bay. When we arrived their were two
Elephant bulls and a group of Hyenas drinking water at the the waterhole.
The Hyenas played in the water and chased each other like playful dogs at the
beach. To top it all a Lioness with suspected cubs came for a drink. Its was a
wonderful sight and we felt truly blessed to end of our trip this way. 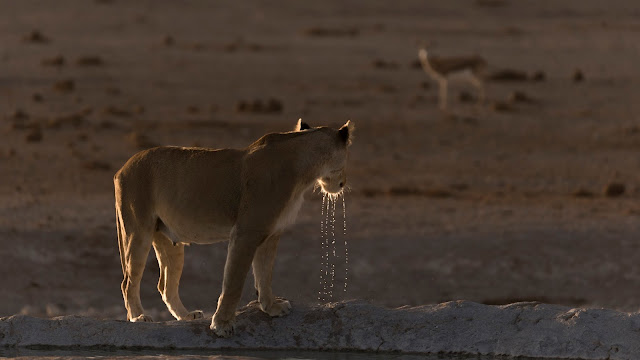 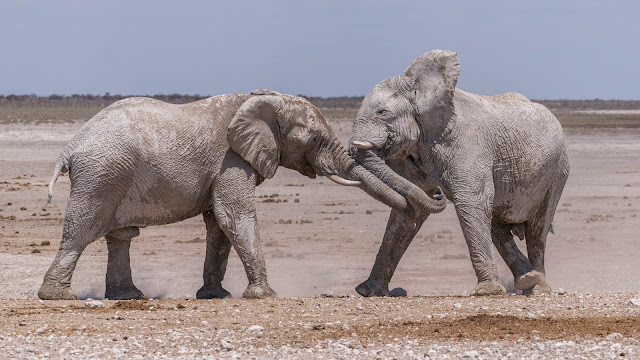 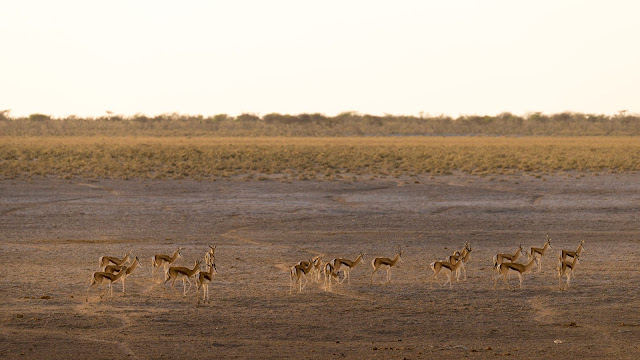 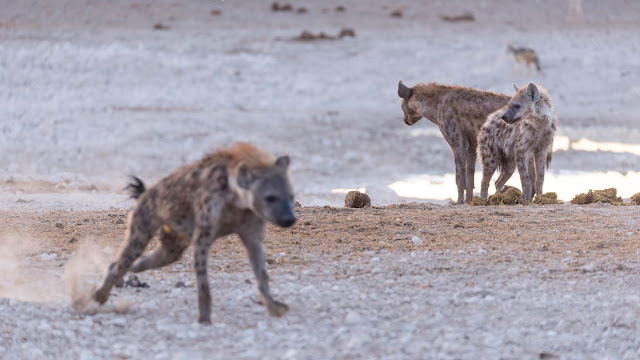 Our Image selection for #Myshot: Hyenas
Thank your for each and every contribution. It's much appreciated 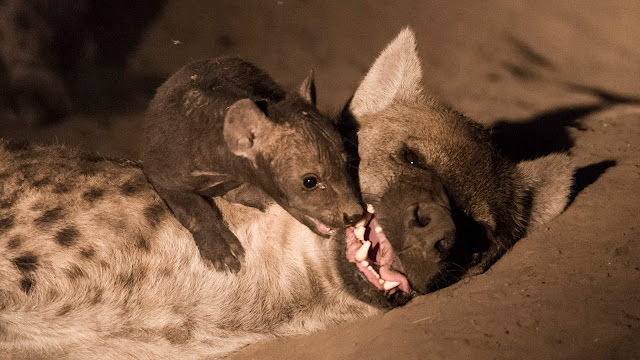 There are four species of Hyena:  spotted, brown, striped, and the aardwolf. All
hyenas are usually nocturnal. The spotted hyena is the most well known.Spotted
hyena live in Africa in savannas, grasslands, woodlands, forest edges, sub
deserts and mountains. They live in territorial clans of related individuals,
sometimes up to 80 members. Spotted hyenas are hunters and scavengers.

Interesting facts
Hyenas don’t just laugh for fun. Scientists say that the pitch and the note frequency
(or tone) of a hyena’s laugh can give an indication of its age and social status.
Female spotted hyenas are more muscular and more aggressive than their male
counterparts. This is because the females have three times as much testosterone
in their bodies. As a result, spotted hyena societies are matriarchal. Even
baby girl cubs rule over the boys.

Female spotted hyenas have a pseudo-penis that is basically an elongated
clitoris. Some pseudo-penises can grow up to seven inches long, totally besting
the average length of the human penis.Hyenas and lions often fight over the
same territoriesand hunt the same prey. This leads to fierce competition
between the Two animals. They steal each other’s food and kill off
the young of their enemies.

Ruth Nussbaum
www.naturalistphoto.com
I love the carefree approach hyena's have, they never seem botheredby
obstacles they may encounter in their day to day lives. Push on, live on
and survive - definitely one of natures toughest creatures. 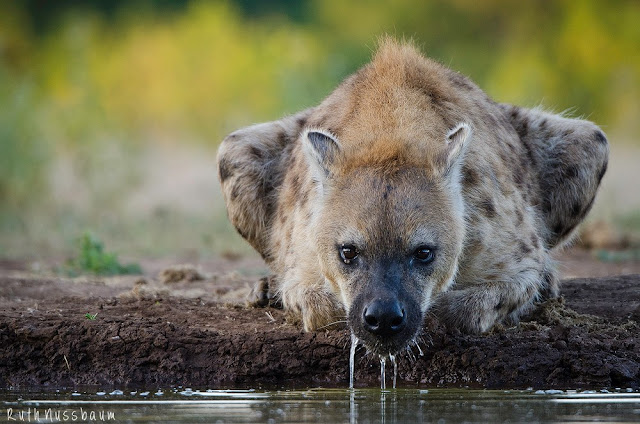 We had a great sighting of a Spotted Hyena on a Impala kill early morning
long before sunrise. Not a great pic but I kind of like the sense
of movement. Shot handheld at 1/13 sec. 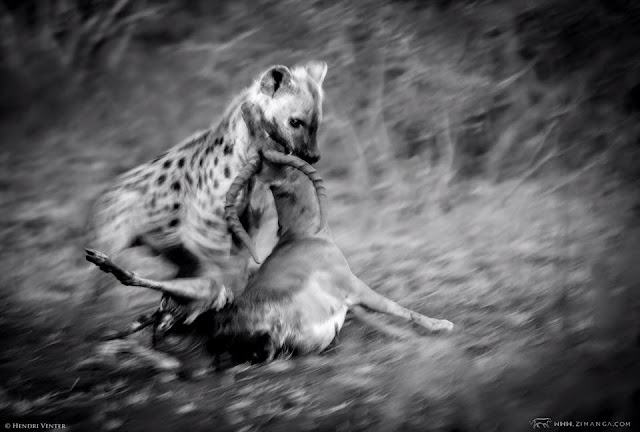 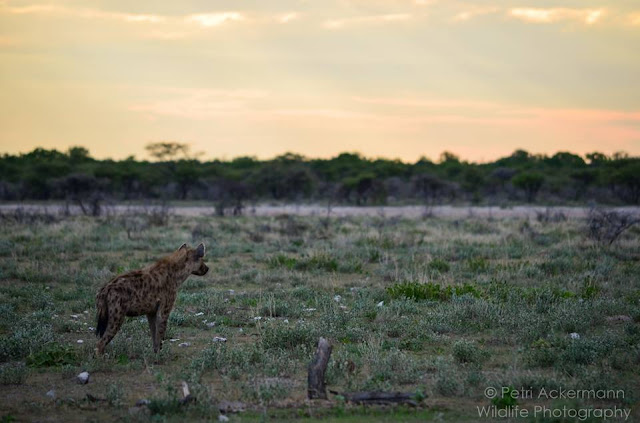 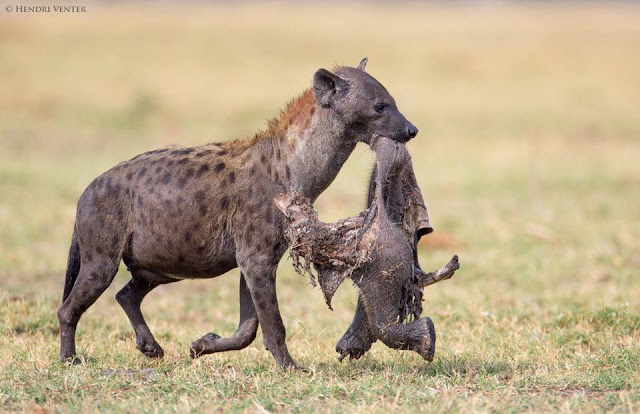 
This shot was taken at Chudop Etosha National Park, on a very hot
summer afternoon. 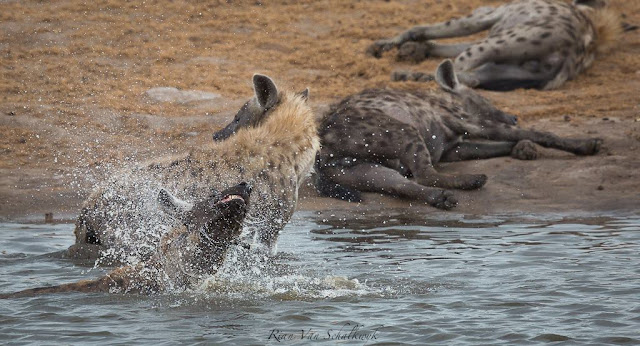 Peter Pischler Wildlife Photography
This heavily pregnant Hyena was standing in the middle of the road
in Kruger N.P. watching something (which I could not see) intently. 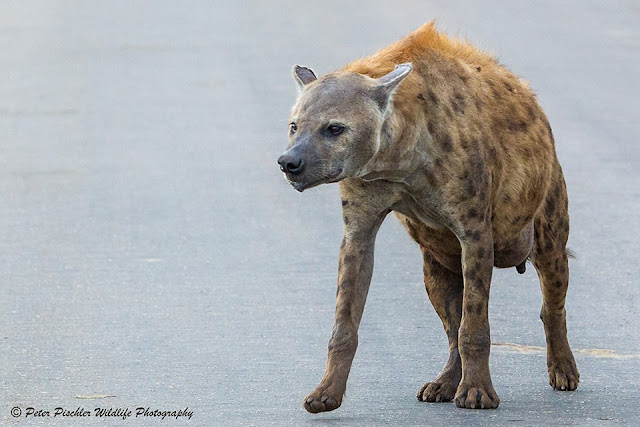 
Five Hyena's came towards the waters edge with one carrying the foot of an
elephant, she dipped it briefly into the water, looked at us and proceeded
on westwards towards the den site. 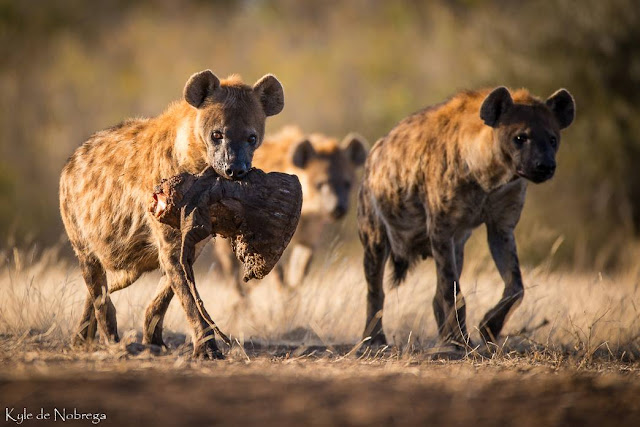 "Unlikely Friends" Hyena Cub and Lion Cub Friends. Lion Park Johannesburg
South Africa. The Hyena Cub is a orphan put into the lion cub enclosure
and accepted as one of the "pride". Healthy and Playful. 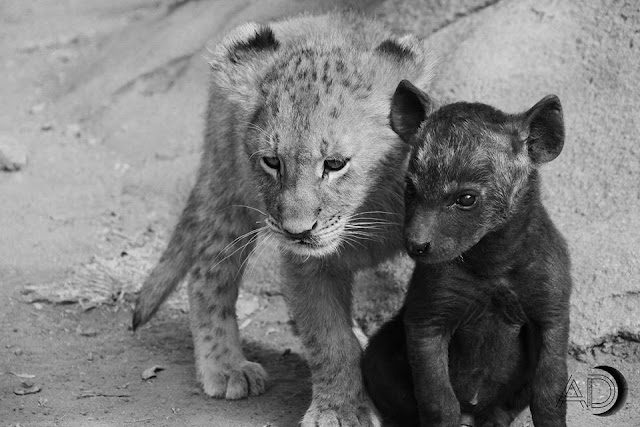 I took this picture one afternoon at Chudob waterhole in Etosha. The hyenas
are usually on the other side of the water, but this one decided to come
past our vehicles and provided me with a fuller shot. 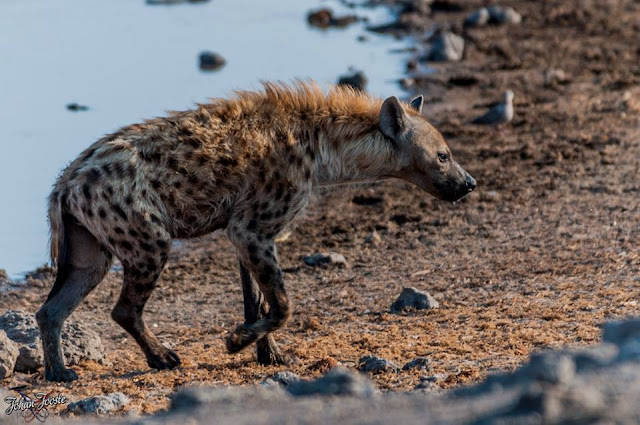